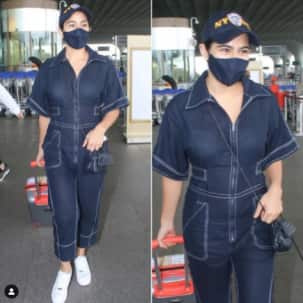 Sara Ali Khan was seen at Mumbai airport in a denim jumpsuit. The actress was flying off to Assam for the shoot of a documentary. Sara Ali Khan wore a denim jumpsuit for the trip. It was teamed with white sneakers, a small Louis Vuitton bag and a cap. She wore a mask in a matching colour. The denim jumpsuit donned by the actress is one we did like to wear in a jiffy. It looked comfortable and chic. Sara Ali Khan is someone who put comfort over and above everything else. The jumpsuit looked like a great choice for the trip. Also Read – Sanjay Dutt, Kangana Ranaut and more Bollywood celebrities who overcame shocking challenges like a boss

Coming to the details of the outfit, she was styled by Ami Patel. The jumpsuit was from a brand called House Of Eda costs Rs 9, 999. Well, it is not as expensive as many celebrity outfits but for many of us, it is half a month’s salary. The outfit is made of tencel, linen and cotton. It has a front zipper closure and side cargo pockets. In fact, the pockets are big enough to put in quite a bit of stuff. Sara Ali Khan chose a brand that is from India. Also Read – Throwback to the time when Katrina Kaif wanted to QUIT Bollywood after watching Namastey London; wanted to ‘find a new career’ for herself

The actress had gone to Guwahati, Assam, where she visited the famous Kamakhya Temple. Her mom Amrita Singh had also gone with her, along with a couple of friends. It seems she has shot a documentary with the Armed Forces of Assam. It looks like it is a special for a channel for Independence Day. On the professional front, she has Atrangi Re with Akshay Kumar and Dhanush lined up for release. The actress’ last release was Coolie No.1. Sara Ali Khan made full use of the time when lockdown was eased out by travelling to Goa, the Maldives and other places. Tell us what do you think about her outfit! Also Read – When Ranveer Singh, Ranbir Kapoor, Shraddha Kapoor and more Bollywood stars delivered 8 Box Office BLOCKBUSTERS in just 1 year