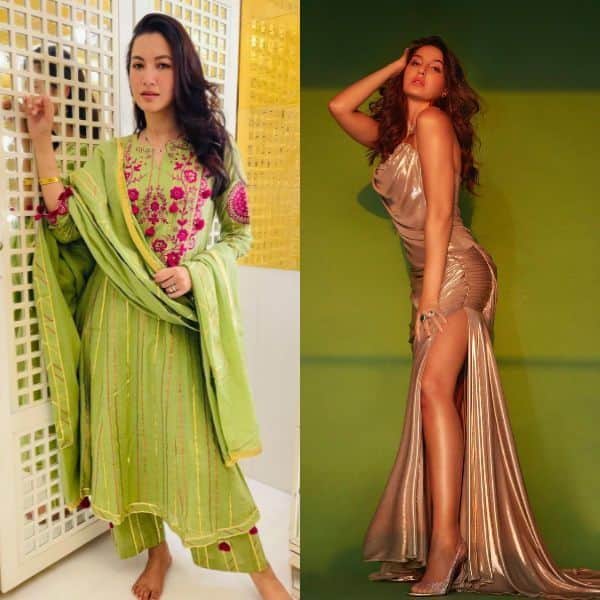 It is that time of the week when we take a look at celebs who left us impressed with their fashion choices. Nora Fatehi proved that she is the ultimate slayer when posed in a metallic Georges Chakra gown. On the other hand, Gauahar Khan’s cotton salwar kameez also looked great. Check out the best dressed celebs of the week… Also Read – Say what! Ajay Devgn’s Maidaan to feature football players from all across the world

Gauahar Khan
The gorgeous Gauahar Khan celebrated her three-month wedding anniversary by dressing up a little. She chose a light green cotton salwar kameez with work done on it in a bright shade of magenta. The outfit was from Tasha India. Despite zero makeup, Gauahar Khan looked glowing. Also Read – Alia Bhatt, Nora Fatehi, Katrina Kaif and more actresses who don’t have Indian citizenship! WATCH

Radhika Apte
Radhika Apte looks smashing in monochromes. The lady chose a white dress with heels for an event. With her hair slicked back, earrings and heels, she looked great.

Jasmin Bhasin
All of us prefer old clothes for Holi given the kind of damage caused by colours. But Jasmin Bhasin chose a gorgeous white dress with red roses motifs for the occasion. It was teamed with a choker.

Kajal Aggarwal
The actress has been busy with the promotions of Mosagallu of late. Kajal Aggarwal opted for a white and black outfit with prints. The outfit was keeping in mood for the summers.

Disha Parmar
The bubbly actress chose an onion pink dress for a summer photoshoot. Disha Parmar who is in the news for dating Rahul Vaidya looked radiant.

So, these were the celebs who left us impressed with their fashion choices. Tell us whose look did you love the most?