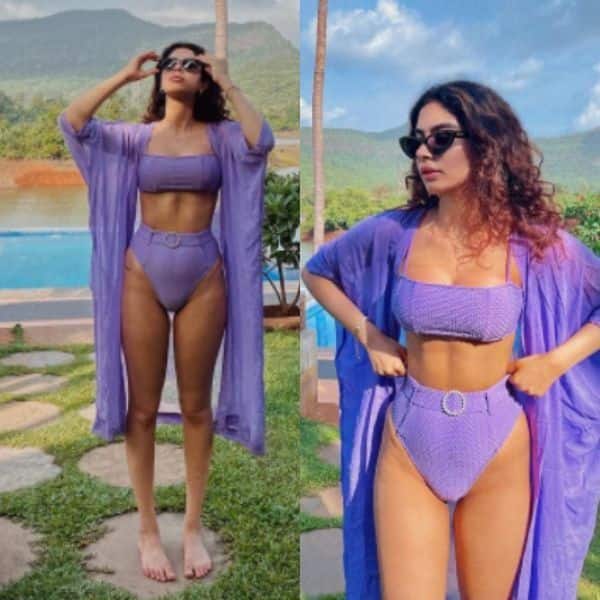 Oh damn! This is what you will see once you see Khushi Kapoor’s pics in a lavender bikini. The star kid was known for her fashion quotient from her teens. Whether it is her handbags or choice of lehengas, Khushi Kapoor is a stunner. The young lady has dropped a couple of pics in a lavender bikini. She is wearing a tube bikini top with a high-waisted bottom. A long shrug completes her chic resort look. Some days back, we saw Janhvi Kapoor burning social media with her bikini pics from a vacation. Here is a look at the pictures… Also Read – From Akshay Kumar-Priyanka Chopra to Hrithik Roshan-Kangana Ranaut – 9 Bollywood celebs whose alleged extramarital affairs shook the nation

Khushi Kapoor has been away for a vacation. As of now, the second wave has abated a bit. Experts are predicting a third wave in September. Keeping this window in mind, people are enjoy small and mini vacations. The star kid was seen sporting curly hair in the pics. Khushi Kapoor who was studying in New York has been back in India after the pandemic struck the world. She has been making videos in between. Also Read – Producer Dil Raju to launch Sridevi and Boney Kapoor’s daughter Khushi Kapoor in Tollywood? – deets inside

Boney Kapoor, her dad has denied news of Khushi Kapoor making a debut soon. He has said that they have not decided yet. The star kid is supposed to debut opposite Sara Ali Khan’s brother Ibrahim Ali Khan. Given how gorgeous she is, people are quite eager to see Khushi Kapoor on screen. Also Read – Khushi Kapoor dishes out princess-y vibes in her latest photoshoot, and we cannot stop gushing

Meek Mill Posts CRINGE Boxing Video . . . Fans Are Laughing At Him ACROSS Twitter!!

30+ Fun Facts about the Kardashian Family