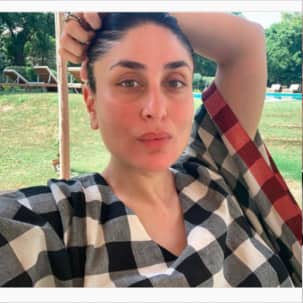 Whatever Kareena Kapoor Khan does, you can expect her to do it in great style. The actress, who gave birth to her second baby on February 21, 2021, is already back to work. She has also started working out to get back in shape. When she is not on duty, you can see her visiting her sister Karisma Kapoor‘s home or bestie Amrita Arora‘s house. However, the actress is ensuring that she is safe while she steps out of the comfort and safety of her Bandra home, especially during the second wave of Covid-19. The actress is also aware how the coronavirus crises is affecting Bollywood and attacking celebs. Also Read – Kareena Kapoor Khan finds a new fashion fix after her kaftan obsession – view pics

Considering the testing times that we are in, the actress issued a stern message to all Bollywood celebs and her fans as well. It is an important reminder to follow the basics and stay safe from the deadly virus. Kareena, who is very active on social media, shared a picture of herself – a carfie – where she is seen wearing a mask. It is a Louis Vuitton mask worth Rs 26,028 that she is wearing. However, what’s more precious that the mask itself is the caption that went with the picture. Kareena posted, “No propaganda, just wear your mask.” So there you have it! It has a hidden message for all those people out and about who are flouting the basics and leading to a situation that is going out of control. Check out Kareena’s post below. Also Read – It’s Expensive: Malaika Arora and Jacqueline Fernandez’s twin red outfits will cost you a bomb — can you guess the price?

On the work front, Kareena Kapoor Khan had been shooting for a few commercials post having her baby no. 2. We hear that she will make a comeback to the screens next year. While she hasn’t made an official announcement as yet, we hear that Takht, Veere Di Wedding 2 and an OTT project are on her mind. Apart from being on the sets, the actress is also missing travelling, and especially spending time in London, jamming with her fam. She is also working out and has been treating us to her no-makeup selfies every now and then. Also Read – Kareena Kapoor Khan all set to get back to work post second baby; kickstarts her fitness routine – View Pics

Russell Wilson: My Biggest Fear Is Not Death Or Injury; It’s Ciara LEAVING ME!

Russell Wilson: My Biggest Fear Is Not Death Or Injury; It's Ciara LEAVING ME!