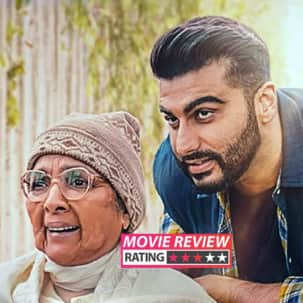 India-Pakistan stories have a certain kind of resonance. After all, the common man in both the nations have so much in common. As of now, there is too much tension but we see a lot of stuff from the neighbouring country going viral in India. Sardar Ka Grandson plays a lot on this factor and the irony of the political relations. The film is based on sentiment with a dose of comedy. Here is our review of the movie. Also Read – Trisha Krishnan pens a heartfelt note thanking her fans for their birthday wishes ‘amidst terribly distressing times’

So, if you have seen the trailer of Sardar Ka Grandson and wondering if to watch it or not, scroll down for the full review… Also Read – Sardar Ka Grandson song Main Teri Ho Gayi: Arjun Kapoor-Rakul Preet Singh, John Abraham-Aditi Rao Hydari’s chemistry is lovable

Amreek Singh (Arjun Kapoor) is a happy-go-lucky but unsuccessful young man with a business in Los Angeles. After his breakup, he is called back to his home town, Amritsar as his daadi (grandmother) is ailing. Sardar/Rupinder Kaur (Neena Gupta) who is suffering from cancer has a dying wish to see her old home in Lahore. She is denied permission due to a spat with an official. Does Amreek Singh manage to take his daadi to the old house in Lahore? You have to watch the film for it…

Sardar Ka Grandson has a very simple plot. Amreek Singh (Arjun Kapoor) after a split with his partner-girlfriend, Radha (Rakul Preet Singh) decides to fulfill the last wish of his dying grandmom. The film scores mainly because of its second half. It has the right dose of comedy and emotion. Kaashvie Nair creates the moments when you genuinely feel happy for the underdog. Talking about the performances, Arjun Kapoor, Neena Gupta, Aditi Rao Hydari, Kumud Mishra are in fine form. The recreation of Lahore is done very well by Vijay Ghodke. Aditi Rao Hydari and John Abraham create a dreamy chemistry that lifts up their perfect yet short-lived love story. Jee Ni Karda is a peppy number and you will tap your feet.

Neena Gupta is supposed to be a 90-year-old grandmother but the prosthetic done on her could have been a lot better. While she does a good job, the character is rather one-dimensional. The film has all the standard tropes of a feel-good India-Pakistan movie. Some of them are extremely predictable. Also, the film could have been shortened by 10-15 minutes.

Sardar Ka Grandson is a feel-good movie that you can watch with your whole family. It is a film for all age-groups. After Mubarakan, Arjun Kapoor again proves that he has a flair for comedy. While the comedy might not leave you in splits, the emotions do strike a chord.

Best Sandals for Women in 2021

Kandi Burruss Responds To Boyz II Men’s Shade: I Did Have A Bad Experience!!

Kandi Burruss Responds To Boyz II Men's Shade: I Did Have A Bad Experience!!