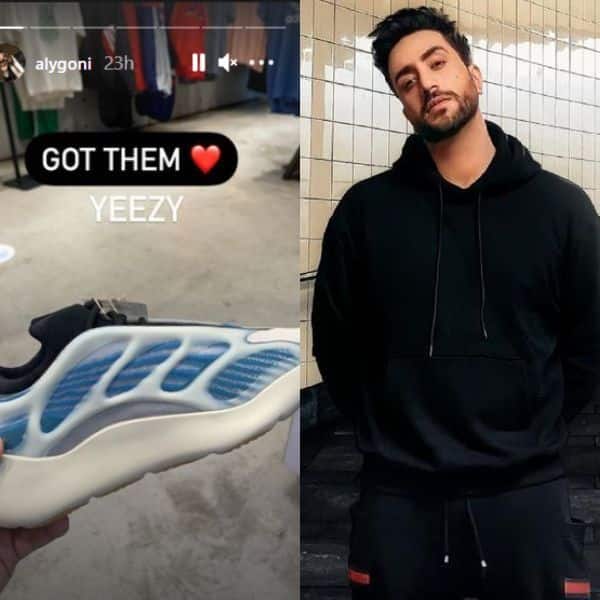 If you are a sneakerhead then you will want to own the best new pair in town. Aly Goni is now the proud owner of a pair of latest Yeezy sneakers from Adidas. The young man has immense love for clothes and shoes. We have seen him sport the best of Indian and foreign brands inside the Bigg Boss 14 house. Today, Aly Goni has shared his latest acquisition on his Insta stories, and we are sure that every shoe lover is a bit envious. He has been raking up the moolah after Bigg Boss 14 and can surely splurge a bit on his fave things. Also Read – Jasmin Bhasin and Aly Goni’s desert safari in Dubai could make for a great magazine cover – view pics

The actor bought a pair of Yeezy 700 V3 Kyanite sneakers. The price of the pair is $200 on the official site of the show brand. At that cost, one can buy a Samsung Galaxy phone as well. In fact, you can purchase furniture, an iPad and many more stuff. The Yeezy sneakers offer supreme comfort during workouts and protects the feet. The highlight are the soles and extra padding. They are also made with sustainable technology. Also Read – Bigg Boss 14 lovebirds Aly Goni and Jasmin Bhasin’s Dubai vacation is all about great romance, good food and desert safari

Aly Goni was one of the best dressed guys inside the Bigg Boss 14 house. He wore a red Balenciaga hoodie in one of the tasks. We saw that Jasmin Bhasin got him a sweatshirt from Christian Dior for his birthday. He wore it for the celebrations in Kashmir. Aly Goni who was a part of shows like Yeh Hai Mohabbatein and Naagin 3 was also in Khatron Ke Khiladi. His latest venture, Tera Suit with Jasmin Bhasin is about to touch 50 million views on YouTube. The song has been sung by Tony Kakkar. Buzz is that they have five more songs lined up. Aly Goni’s love for smart luxury casuals is surely for one with deep wallets. Also Read – Aly Goni makes a HEARTFELT confession on dating Jasmin Bhasin after Bigg Boss 14

Prince Philip – Here’s Why The Royal Family Will Not Be Wearing Military Garments At His Funeral!