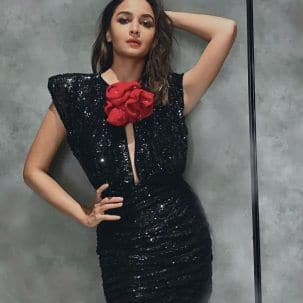 For the occasion of her birthday bash, Alia Bhatt chose a black sequinned mini dress. As we know, a bash was thrown by Karan Johar at his residence. It was attended by the likes of Aditya Roy Kapur, Aryan Khan and Shashank Khaitan. The lady decked up for the do in a black dress teamed with heels from Christian Louboutin. Alia Bhatt opted for soft dewy makeup with mild smokey eyes. She had the messy hair look. Overall, Alia Bhatt looked fabulous. Stylist Lakshmi Lehr decked her up for the occasion. Of late, the stylist has been dressing up actresses like Sara Ali Khan, Janhvi Kapoor and Ananya Panday for magazine covers. While Mike Desir did Alia Bhatt’s hair, her makeup was done by Puneet Saini. Also Read – Throwback: When Alia Bhatt reacted to boyfriend Ranbir Kapoor’s past relationships and said that she is no less

The dress worn by Alia Bhatt was from the label, Magda Butrym. She is an international designer who founded her label in 2014. The sleeveless sequin mini dress came with a red rose at the collar. A billowing top and short fitted skirt made up the dress. Coming to the price of the dress, it costs €2355 on the official website of the brand. If we convert that to Indian currency, the price is Rs 2, 02, 788. At that cost, one can purchase a high-end bike. You can choose from brands like Royal Enfield, Honda, Jawa, Husqvarna, Suzuki and others. Also Read – When Mahesh Bhatt recalled Pooja Bhatt, Rahul Bhatt’s SHOCKING reaction to his marriage with Soni Razdan

On the occasion of her birthday, the makers of RRR also revealed her look as Sita from the movie. This is her first collaboration with SS Rajamouli. The actress also has the big budget Gangubai Kathiawadi in her kitty. The film directed by Sanjay Leela Bhansali also stars Ajay Devgn and Shantanu Maheshwari. Plus, there is Brahmastra, which is her first project with boyfriend, Ranbir Kapoor. Fans are very keen to see the real life jodi together in the movie. Also Read – Ashutosh Rana tests positive for COVID-19 days after taking first dose of vaccine; says, ‘I will soon be healthy’

Meghan Markle Sends Meaningful Gift To The Royal Family Despite Not Being Able To Attend Prince Philip’s Funeral!

Meghan Markle Sends Meaningful Gift To The Royal Family Despite Not Being Able To Attend Prince Philip's Funeral!